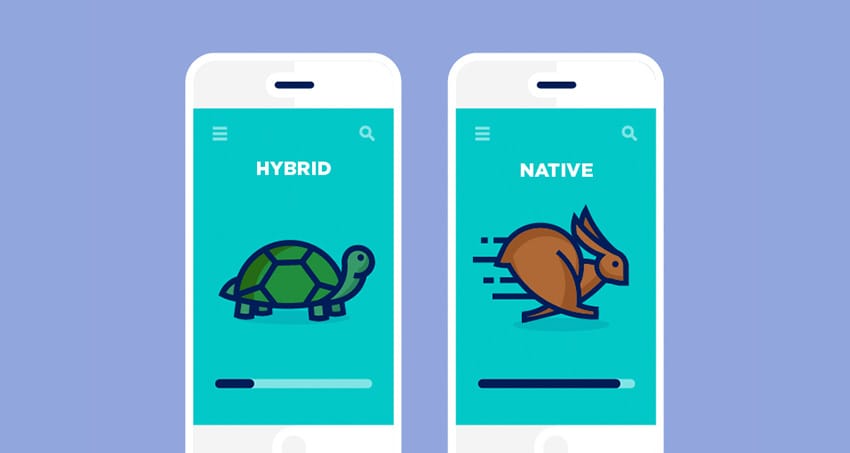 I harbor great disdain for Microsoft’s 8th edition of Internet Explorer, it’s no secret, I’ll rant about it to anyone I happen to come across, I’ll rant...

If you’re reading this blog post, chances are you’ve used a mobile app at some point. It’s also likely that you’ve used two of the most common types of mobile apps: hybrid and native. If you’ve never heard of these terms before, allow me to elaborate:

A native application is an app that has been built for a specific operating system and are downloadable through the App Store and Play Store for iOS and Android respectively. iOS/iPhone apps are typically created using a language called Swift (or Objective C), and Android apps use Java.

The main benefits from a user’s point of view in using a native mobile app are threefold:

If you have commissioned a company to build you a native app, it’s likely that they’ll build two separate apps (one for iOS and Android). This is great from a user experience point of view as Android and iOS users expect different things in terms of design and layout. Therefore, in building a native app, we can cater for both iOS and Android platforms to provide better UX and ultimately fulfill the user's expectations.

The only main benefit to using a hybrid app is that they are cheaper and quicker to build as they are built in a single language which is typically JavaScript. This means web developers can build hybrid apps without having to employ a specialised app developer. This is fine as it allows for cheaper development. However, as expected, this is usually detrimental to the quality of the app itself.

While native apps are separated into two (one for iOS and one for Android), the code between the iOS and Android versions of the same hybrid app is shared which means that hybrid apps don’t cater to an individual operating system. Therefore, we can’t successfully fulfill UX expectations to the detail that we can with native apps.

So when are hybrid apps useful?

We would typically recommend going native if your app matches any of this criteria:

If your app is incredibly simple (in other words, what we call an information or brochure app, with no special functionality), OR you have a very low budget, we would consider the hybrid approach.

However, we truly believe that it is impossible to achieve the same level of quality in a hybrid app as you would in a native app. We also believe that “Quality is Foremost” (see our core values here) which is why we would always recommend truly native solutions.

We recently built and launched a native mobile app for Your Voucher Book, a popular voucher book platform operating in and around Teesside. Originally, the director had received a quote for a hybrid-based app. However, once we explained the benefits of going native, she commissioned us to build the app (along with a brand new website). We hate to toot our own horns, but we're pretty proud of this one. Watch this space for the Your Voucher Book case study!

How can I get a quote?

If you are thinking about getting a mobile app built, we’d love to help! Drop us an email at studio@viacreative.co.uk, or give us a ring at 01642 804534 to arrange a free consultation meeting with our director and the team.

We had a cheap hybrid app built for our restaurant to take orders, but it was so slow and pretty much unusable at times. Wish I'd known this 3 years ago.